A pool alarm is a safety feature designed to alert adults when unsupervised children enter a pool. There are a number of different designs available, but none is foolproof. Pool alarms are safety features for children and pets. 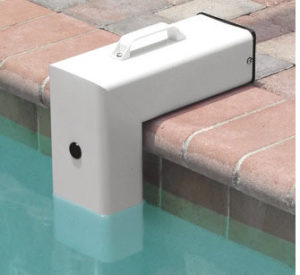 Drowning remains the second leading killer of children under the age of 14 and, in many Sunbelt states, drowning tops the list. Approximately 350 children under the age of 5 drown in swimming pools annually, mostly in residential settings. Many of these deaths occur when unsupervised children enter a pool and are unable to swim or exit, resulting in drowning or near-drowning within minutes. In these situations, pool alarms may have reduced the response time of adults, perhaps saving the child.

In December 2007, the Virginia Graeme Baker Pool and Spa Safety Act took effect, which created a voluntary grant program that encourages states to pass legislation for pool and spa safety. The bill requires states to write laws that call for pool alarms, as well as door alarms, pool covers, and self-closing/self-latching gates. Currently, however, only California, Connecticut and New York have passed such legislation.

Since pool alarms are not foolproof and they rely on someone remembering to activate them, they should not be depended upon as a substitute for supervision, or for a barrier completely surrounding the pool. Pool alarms should also be used in conjunction with other types of alarms, such as gate alarms, perimeter alarms, and window and door alarms. Even some pet doors come equipped with alarms, owing to the recent attention given to the 100 or so documented accidents where a child escaped to a pool through a pet door. Pool alarms are thus one protective layer of many, none of which is sufficient as a sole preventative measure against child drowning.
Pool alarms can be used to save dogs and cats, too. Data show that one of every 1,027 pets drowns in pools each year, which is a statistically higher risk than the drowning threat for small children. The reason here is obvious: pets are more likely to be allowed to roam free and unsupervised compared to small children, especially in rural areas where nearby traffic is not a danger. Also, pool fences may thwart children, while dogs and cats can jump or climb their way to the other side. Not all dogs are good swimmers, though, and even healthy dogs that are used to swimming in ponds might not be able to lift themselves out of a pool when they tire.

Pool Drain Hazards
While drowning is a well-publicized danger associated with swimming pools, comparatively little has...
Pool Water Pathogens
Germs from other swimmers and unsafe water supplies can easily contaminate pool water, especially...
Pool Alarms
A pool alarm is a safety feature designed to alert adults when unsupervised children enter a pool....
Pool Barriers
An outdoor swimming pool barrier is a physical obstacle that surrounds an outdoor pool so that pool...
Reserve Studies
A reserve study is a budget-planning tool, arranged by a homeowners association, which is designed...